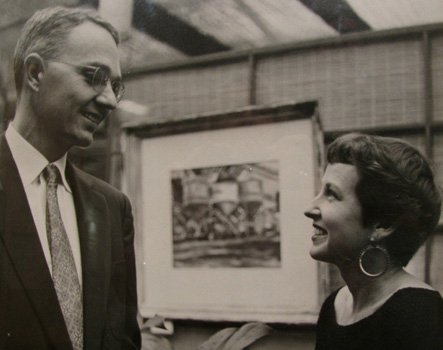 Alan Post is perhaps best known for his exemplary public service as California’s Legislative Analyst for nearly three decades, serving during the tenure of five governors. As the head of the non-partisan budget office, he won plaudits throughout the nation for his work.

While Alan was well known for his public service and Helen was an active civic leader in her own right, they were both accomplished artists. Their works were exhibited in galleries and museums throughout the region and state, including the Crocker Art Museum.

Helen was a talented sculptor whose works include the ferrous cement and bronze sculpture at the entrance to the Teichert headquarters and the bronze figures at the Aesclepius Medical Building. Alan was a prolific and distinguished painter whose artistic career spanned more than 70 years. His early works were mostly landscapes consistent with the California Watercolor style, but his subject matter and technique dramatically evolved over time. Under the influences of, among other things, the German expressionism movement and his extensive travels in Spain, Alan developed a personal and emotional artistic response not only to Mediterranean landscape but also the modest life of the common Spaniard. *taken from the Sacramento Metropolitan Arts Commission website