Andrea Boff’s dramatic compositions and color palettes have evolved after 30 years of visual explorations in both fine art and commercial venues. She is a critically acclaimed illustrator and designer turned painter whose emerging work is currently represented by the Coastal Gallery in Half Moon Bay, California, the Elliott Fouts Gallery, in Granite Bay, California, and Generations Gallery in Yountville, CA. Classically trained in the fine arts at Carnegie-Mellon University, Andrea spent the first part of her career designing computer graphics for television. When she arrived in California in 1999, she began painting in earnest, and has built a formidable base of collectors in a short amount of time. The work is filled with energy, color, and rhythm. Her twisted landscapes break the traditional rules of one point perspective. She continues to reshape and rethink the two-dimensional world. 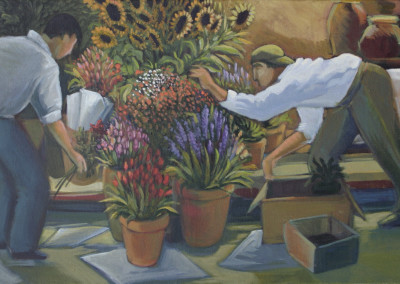