Carl Henrik Jonnevold came to the U.S. in the 1880s and is known to have painted in the Northwest before moving to California in 1887.  Settling in San Francisco, he maintained a studio at 1617 California Street.  He was a self-taught painter except for brief study in the galleries of Paris in 1908.  While in France, he was influenced by the Barbizon painters and their dark palette.  Returning to California, he continued to paint the beauty of northern California in the Barbizon style.  Often working in late afternoon when shadow prevails, he produced hundreds of attractive tree and meadow scenes which he exhibited in local galleries.  By the time of the stock market crash in 1929, Jonnevold was poverty stricken and living alone at his small studio at 560 Kearny Street.  In that year he was sentenced to two months in jail for aiming a gun at his landlord.  Jonnevold disappeared from San Francisco about 1930.  A letter at the Oakland Museum gives his date of death as June 9, 1955 but no location.  His works have gained renewed respect in recent years and are highly sought after by collectors. 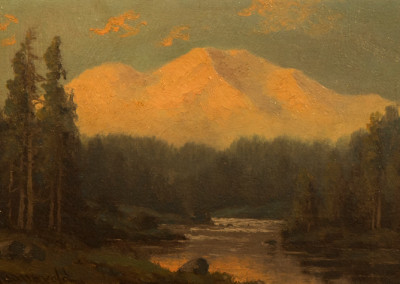