Colleen Ross was born in Maumee, Ohio and began painting at the age of fifteen. She attended Bowling Green State University, where she earned a B.S. in art education with a specialty in painting. Colleen Ross’s work has always celebrated the nostalgic, reflecting her love of the classic movies of the ’40s and ’50s. She executes her work with visible, energetic brush strokes and vibrant, emotional use of color.

Celebrity clientele and Collectors include:

Brooke Shields whose show with Ross generated such a buzz, lines of fans stretched down Rodeo Drive in Beverley Hills to see the artist and star.

Delta Burke, whose portrait was featured on the Barbara Walter’s special as well as in Delta’s autobiography.

Teri Hatcher, a fan and close friend of Ross’ since the 80’s. Ross has done portraits of both Teri and her daughter, paintings featured on the hit show, Desperate Housewives and the illustrations for Teri Hatcher’s memoir, Burnt Toast.

George Lucas, who loaned Ross his Tucker car which she then in turn immortalized in the piece “Very Nice Lines”.

Andrew Solt,an Emmy Award winner and well-known in the industry for his documentaries of Jacque Cousteau, the Rolling Stones and the book “Imagine”, celebrating his friend John Lennon. (After the death of Andy Warhol, Claudia Fulkenburg, Solt’s wife, looking for another portrait artist, chose Ross, saying that there was only “one choice left ” that was of the same caliber as Warhol to do her portrait). 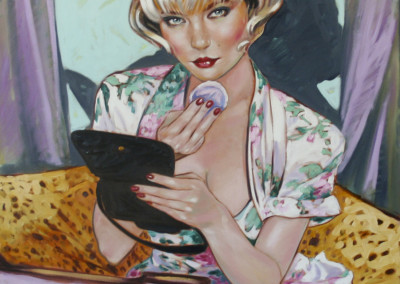