Provence’s rolling farmlands, sun-drenched coasts and looming  valleys have always
been a source of inspiration to the great painters of history, including Elisabeth
Estivalet, a painter of our time.

A native of Poland, Estivalet fell in love with the region of Provence when she settled
there in the late 1970’s.  Though she holds degrees in both Economics and Philosophy,
the countryside of Provence elicited from her a natural artistic talent, and she
instinctively embarked on a passionate and lifelong career as an artist.   Painting
solely with a palette knife, Estivalet taught herself to master the techniques of color
management, perspective and composition.  What resulted are candid renditions of a
tranquil and serene Provence.

Estivalet’s sunny landscapes bring to mind the works of the old Post-Impressionist
masters.  Her subject matter and artistic style are reminiscent of the masterful works
of Paul Cézanne.  Her thick palette and vibrant colors are evocative of Vincent Van
Gogh and Paul Gaughin in Arles.  Yet, in spite of the many similarities and
comparisons, Estivalet stands alone as a painter.  Her exceptional interpretations of
Provence are unrivaled.  Her refreshing works elicit feelings of contentment and
tranquility, and invite one to explore a pristine and undiscovered French countryside.

In the late 1980’s, Elisabeth and her husband, Michel, opened a gallery of their own
near their home in Provence as a vehicle to sell her works.  As a result of the gallery’s
success and Michel’s encouragement, Estivalet gained the confidence to enter her
artwork in various international juried art competitions throughout France.  Her
unparalleled evocations of the French countryside won her numerous gold medals and
first prize awards.  The international acclaim and exposure she gained from these art
competitions led her to Artexpo Las Vegas in 1996, where she officially debuted her
work in the U.S.  In Las Vegas, Estivalet’s stunning landscapes caught the eye of
a prestigious New York art publisher, who offered to represent her in the U.S.  This
relationship resulted in the publication of 9 limited edition serigraphs of her work
and countless sold-out solo exhibitions from east coast to west coast.  In early 2000,
unable to keep up with the public demand for her works, Estivalet closed her gallery
in Provence, and decided to concentrate solely on her American market.  Now, in
2008, after an amicable split with her New York publisher, Estivalet forges ahead on
her own. 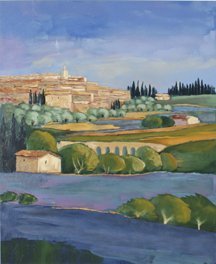 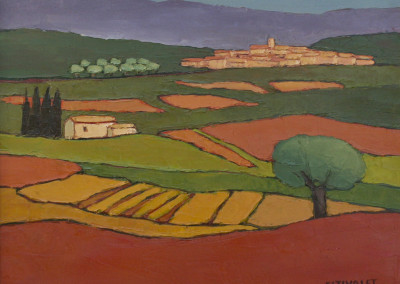 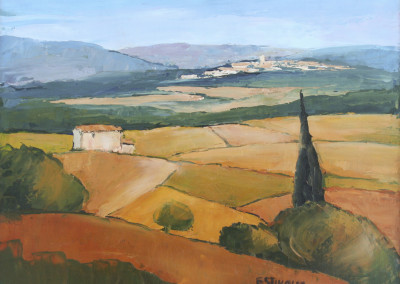 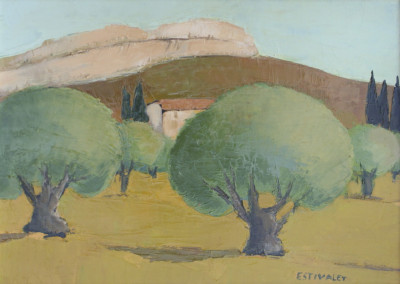