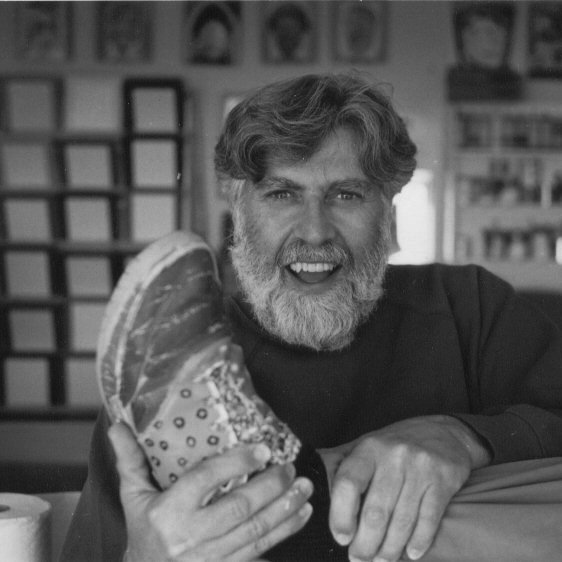 On a Hot, Sticky day in August, 1947, Fred Babb was born in Aitkin, a small town in rural Minnesota. He eventually became one of eight siblings positioned somewhere in the middle of the family constellation. Between 1947 and 1982, a lotta stuff happened, but it there’s not enough room here to put it all down, and besides, its none of your business. It is, however important to mention that in 1952 his family piled into their sleek Hudson and moved to California.. One year later, Fred remembers picking up a drawing pencil for the first time, and, instantly he heard a VOICE from above say “Put down that pencil and do your chores”. It was, of course, his dad – but he prefers to think of it as his first almost religious experience.

During the formative years, his major influences included – MAD Magazine and Soupy Sales and later on the Kinks and Bob Dylan. He had a few bad influences, too, but we won’t go into that.

ANYWAY, Fred learned early on that although art was real fun, being broke was not, so in 1982, after 22 different occupations since 1962, we find him quickly burning out as a painter-furniture refinisher in Bost, MA. Fed up with the job and his boss, Fred convinced his lovely and supportive wife, Julia that there was GOLD Art out west in California to be mined – so the family: Fred, Julia, Amy, and Christopher moved to Folsom, CA – just outside Sacramento.

After 9 years of House Husbanding while Julia worked – which by the way was the eye-opening experience of his life – for it was here that he realized how men have “got it made” going off to work – hanging with their friends and bringing home the Bacon.In 1984, Fred buys a Kiln and begins making small ceramic sculptures with faces in them. During one firing, and explosion occurs and one face is sent off into a spiraling orbit, ending at the bottom of the kiln. That face, after a few months of sitting on a studio shelf, was eventually painted and became a pendant for Julia. Many friends commented on it and said that it should have earrings to match. So Fred and Julia together developed a line of ceramic jewelry called Ear Heads. Because that’s what they were – Earrings and pins that were faces. Eventually, the line grew to include other products such as T-Shirts, Clocks, Cards, Magnets and Mugs. They have over the years acquired a somewhat erreverent bent, poking fun at human behavior and how it relates to art. In 991, Ear Heads officially became WHAT IZ ART and a store of the same name was opened in Cambria, CA where Fred and his family moved in 1988. The moral of this true story is: if something blows up in your kiln, it’s not necessarily a bad thing-Fred Babb 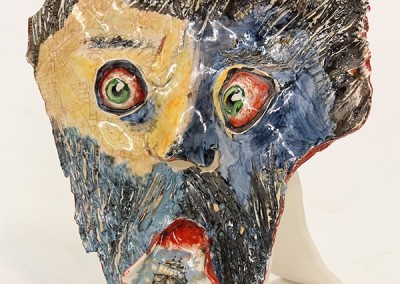