Gil Dellinger is the current president of P A P A; The Plein Air Painters of America. He is a retired Professor of Art at the University of the Pacific. He has inspired many young artists through his talent for teaching and his own artwork, having won the Distinguished Faculty Award for Teaching Excellence and Professional Contribution in 1990.

A Signature Member of the Pastel Society of America, Dellinger excels in his pastel painting. Painting from life, his work captures majestic landscapes, peaceful pastoral scenes, the drama of the Pacific Ocean, dramatic vistas of the southwest, and any scene that catches his eye. His masterful technique is extraordinary. Gil is also a signature member of the California Art Club and the Plein Air Painters of America.  He works in the studio with acrylic paint and on location with oil, pastel and acrylic.  He teaches workshops in all three mediums.

He was selected as one of the 25 artists invited as guests at the Forbes Chateau in Balleroy, France to paint for 10 days in 1997. In 1996, he was selected by American Artist magazine as one of 12 artists to paint on the Forbes/Trinchera Ranch near Durango, Colorado which was featured in the January 1997 issue of American Artist Magazine. The works from the event were shown at the Forbes Magazine Building Gallery in New York at a special exhibition.

In 1999, Dellinger was one of fifteen artists chosen by the Grand Canyon Trust to raft the Colorado River at the Grand Canyon and paint for ten days. The resulting show of works resulted in an exhibition at Forbes Gallery in New York in January 2001. The exhibit became the centerpiece for articles in American Artist Magazine and Art of the West.

He has since curated five major museum exhibitions, 25 artists Paint Yosemite at the Haggin Museum in Stockton, California, and in 2003 Co-Curated, with John Cosby, the exhibit, “From Sea To Shining Sea”  which toured the country to 12 museums from 2003 to 2006 which featured 47 artists from around the country.  It was an artistic answer to 9/11, and was concieved just after the events in New York City. 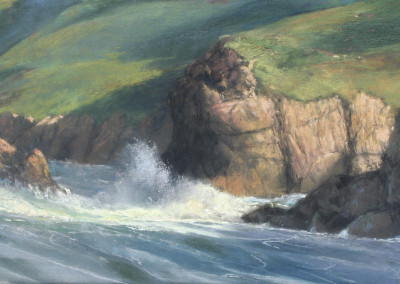