Starting in an art class during High School, Jeff was hooked on painting. “Besides the High School art class, I had a Stepmother who was an art enthusiast, she had numerous books about art and many pieces of original art on the walls she had collected over the years, and this greatly influenced my art appreciation in the early years of my life”. After High School, Jeff attended college in California where he earned a degree in Business Administration, and in subsequent years earned a degree in art, but the real learning was from the numerous art seminars he attended, getting hands on training from art professionals. Soon, he was teaching his own classes where it evolved into teaching Adult Education and even a weekly television show on the old Hearst Cable Network in the San Francisco Bay Area. “I had exactly 28 minutes to complete a painting, this was before high definition TV, so I learned that if a fly flew onto my painting, or if there was some other flaw that I could fix, the TV audience couldn’t see it anyway, so I kept on painting”. The weekly show took a great deal of preparation on Jeff’s part and took away much of his own painting time, eventually he had to give it up. As it turned out, the show must have been very popular because when it stopped airing, the station got swamped with calls asking why it was canceled. “I guess there were lots of people painting along with me or taping the show”.

Jeff’s paintings have been purchased by numerous collectors over the years. The painting of “Mission San Carlos” (see above) is part of the Permanent Art Collection of Felipe Calderon, President of Mexico. It was presented to Felipe as a Goodwill gift by California Governor Arnold Schwarzenegger’s Office of Protocol in the year 2007.

“I get a special feeling when I sell a painting, knowing it’s going to a new home, where it may well hang for decades. I can remember when I was a young boy and staying with my Grandmother, she had a Diego Rivera print in her living room, years later at the San Francisco Museum of Modern Art, I saw the original and it brought back a rush of fond memories. Art is powerful.” 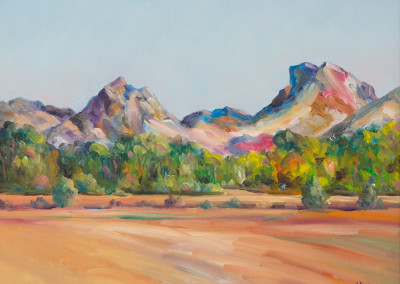