A painterly Peter Sellers, Mencher’s works are like the film “Being There.”  Mencher likes to watch.

Citing literature, television, film, and stage drama, as major influence’s on his work, Mencher’s objective is to present a figurative composition divorced from its context that forces viewers to create their own interpretation of the narrative. By combining calligraphic gestural brushstrokes with passages of tight traditional glazing techniques, Mencher’s work explores the thread of human connection that is woven into our experiences.  Collaged from posed photographs and pop-culture, Mencher’s paintings are frozen moments in a play.  Sometimes these moments are outrageous or surreal and the figures in his paintings are character actors caught up in the action.

William Wisner writes, Realist in execution like a Zola novel, the subjects of Mencher’s work hold coffee cups sit in leather chairs, make confessions and declare intentions, but the silence of the paint leaves us only a visual trace as to what’s being said and what understandings are being clarified.  As you look at Mencher’s art you are reminded of your own lost moments- the people you should have comforted, but didn’t; the lover you trusted who stopped returning your calls; the companion at work who quietly knifed you in committee and then cheerfully chatted you up at the coffee break.  Humble stuff, average people making average choices. . .

Originally from New York, NY, Kenney Mencher earned a BA and MA in Art History from City University of New York and University of California, Davis, respectively, following which he went on to obtain a MFA in painting from the University of Cincinnati in Ohio. He has taught at a number of institutions including the University of Chicago and Texas A&M University, and now teaches at Ohlone College in Fremont, California. He is the author of a text book Liaisons: Readings in Art, Literature and Philosophy. His exposure via solo and group exhibitions is extensive nationwide. 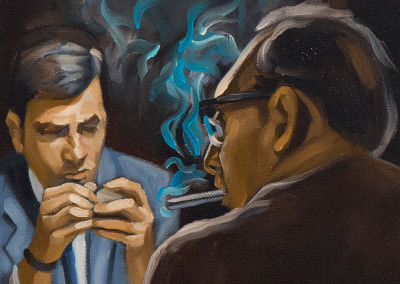 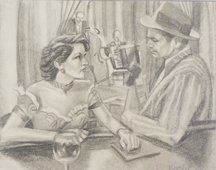 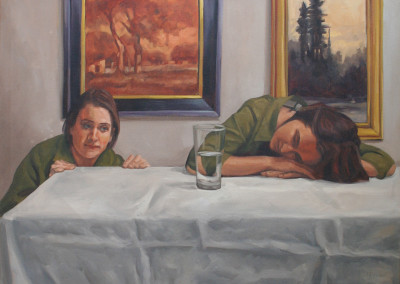