Born and raised in Odessa, Ukraine he grew up next to the Black Sea. As an adult Oleg spent years working on ships traveling the world. He eventually went back to his first love, painting, and moved to the US over a decade ago. Last summer Oleg began to paint his latest series of plein air paintings which took him back to his love of the sea. From August through December, Oleg would travel several times a week to the coast from his home in Ridgefield, Washington. He would work from sunrise to sunset, often times working on multiple paintings each day. Spending his days painting everything from small fishing boats to large cargo ships and everything in between, Oleg was able to capture the beauty that lies along the piers and in the bays and ports of the Pacific Northwest. 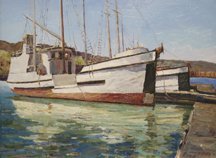 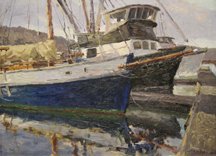 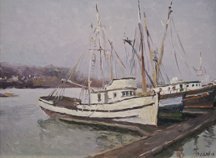