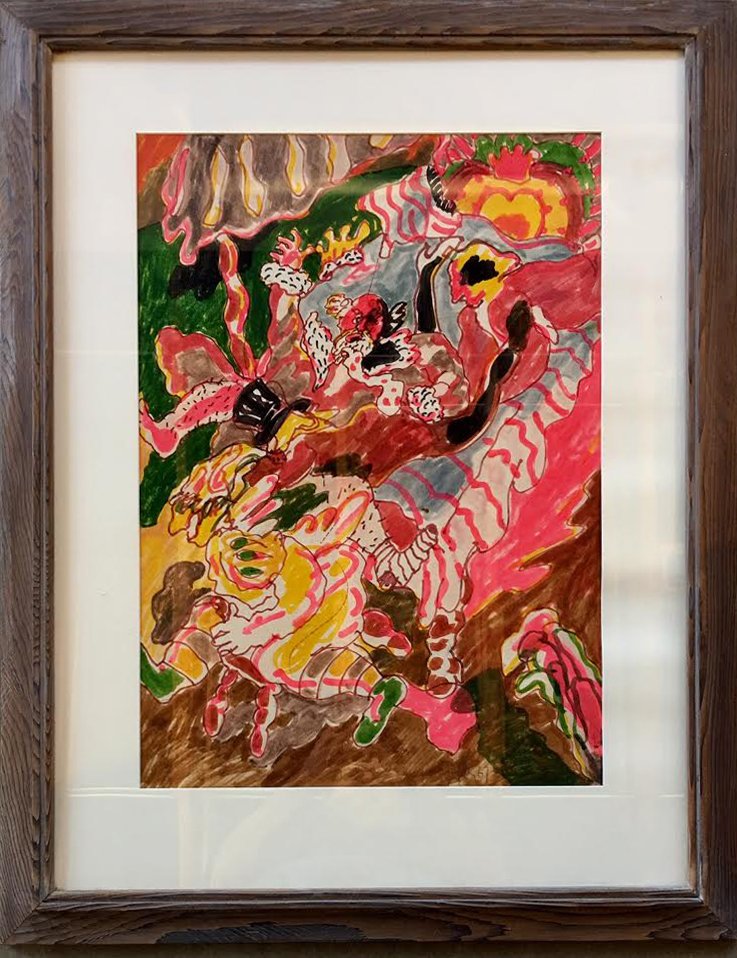 Described as a “painter’s painter,” Jack Ogden has been creating compelling works for over fifty years. His subject matter ranges from still-life arrangements and studio scenes to portraits and figures. His work is informed by numerous sources, including Greek mythology, current events, other artists’ works, and his own personal narrative, including his naval experience. Recurring themes in his work, such as the artist and his muse, or the artist as navigator in the artistic journey, add depth to his imagery.

Ogden’s most recent paintings, oils on wood and canvas, have a looseness and flow that is quite appealing, even when the figures themselves may not always be characters you’d want to meet in a dark alley. Rough-hewn figures that evoke mid-twentieth century archetypes populate these paintings—a group of working-class laborers peer at the viewer; a zoot suit–wearing man who might be a gangster (or a movie star) smokes a cigarette. Sailors and cowboys, bankers and gangsters, these are the characters Ogden paints. At last, the male gaze turns with good humor to the images and stereotypes of masculinity in our culture, and the results are both refreshing and charming.
Jack Ogden himself, however, has no personal or ideological axes to grind. He makes pared-down oil paintings of cowboys and robber barons, but rather than reframe myths of the American West as a postmodernist might, Ogden remains a formalist, committed to executing simple narratives and portraits with the fewest marks needed to establish character, setting, and mood. His large-scale oils aim for a bravura effect, but it’s his small-scale portraits that show how much impact can be squeezed from the smallest gestures. In works like Two Men in Tuxes, the faces are smears, the backdrop is built from a few black strokes, and the domes atop the silver service tray are opposing shadows.

Ogden received his B.A. in 1960 and M.A. in 1962 from California State University, Sacramento, where he also taught for many years. His work is the permanent collections of the Crocker Museum in Sacramento, the Oakland Museum of California, the Butler Museum, and New Britain Museum, as well as the Pilot Hill Collection and California State University/Student Union in Sacramento. He has been published twenty-one times since 1963 in such publications as Art in America (1971), Art Forum (1963–66), San Francisco Chronicle (1972), Artweek (1990, 1994), and Art of California (1992). He has had over seventy solo shows since 1958 and thirty-eight group shows from 1984 to 2004. Ogden has received numerous honors and awards over his career.