Known for his realistically drawn, pensive seeming figures, Wade Reynolds was born in Jasper, New York and from an early age showed artistic talent. While in the Navy he studied electronics. During that period the only art he created was a mural at the Enlisted Men’s Club in Guam. On his return from the navy he dabbled in many different trades including studying briefly at an electronics school, theater in New York, where he studied drama with Herbert Bergoff, to designing fabrics, china, wallpaper, and glassware, until he finally returned to painting.

In May 1959, he moved to Los Angeles where he was a prolific and successful painter of portraits and figures. 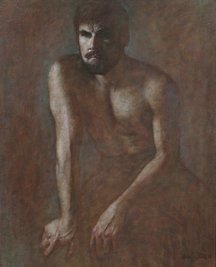